Exports of Uzbekistan textile industry increased by 112% to $1 billion as new markets opened up and new goods were developed. Textile items are shipped to 57 countries and regions. Russia (39%) was the most popular destination, followed by China (18%), Kyrgyzstan (13%), and Turkey (12%). Uzbekistan textile market shipped to Hungary, Slovakia, and Greece in addition to regular markets. It has also exported textile products to Kuwait for the first time with the help of the Uzbek embassy there. The textile market business sector in Uzbekistan improved its export commodity composition by raising the share of value-added end goods such as knitwear and readymade garments to 51 percent.

The Uzbek government has stated measures to minimise raw cotton exports while increasing domestic manufacturing as a local value addition. Cotton production capacity is 1.4 million tonnes per year in Uzbekistan textile industry, with around 60% of it used to meet the needs of local textile sector. However, in 2017-18, Uzbek produced 0.838 million tonne cotton, according to a Statista report. Raw cotton exports accounted for 28 percent of the country's total textile exports, with a value of roughly $300 million. Cotton yarn exports totalled $500 million, accounting for 44% of all textile exports. The growth of Uzbekistan's textile sector is one of the country's policy priorities. In Uzbekistan, around 7,000 different types of businesses are active in textile-related sectors.

Due to legislative improvements and government initiatives, the textile market of Uzbekistan has seen an increase in foreign direct investment (FDI). In recent years, foreign investments in Uzbekistan's textile industry have totalled $3.1 billion. South Korea, Turkey, India, Switzerland, Singapore, the United Kingdom, and Germany accounted for more than 80% of all foreign investments. It also began to export new items such as protective masks and apparel. Textile firms in Uzbekistan are presently producing 6 million masks and 10,000 sets of protective gear every day, which they ship to Russia, Kuwait, Ukraine, Belarus, Georgia, and other countries. The administration also promised to make it easier for producers to receive value-added tax refunds once they export their goods. 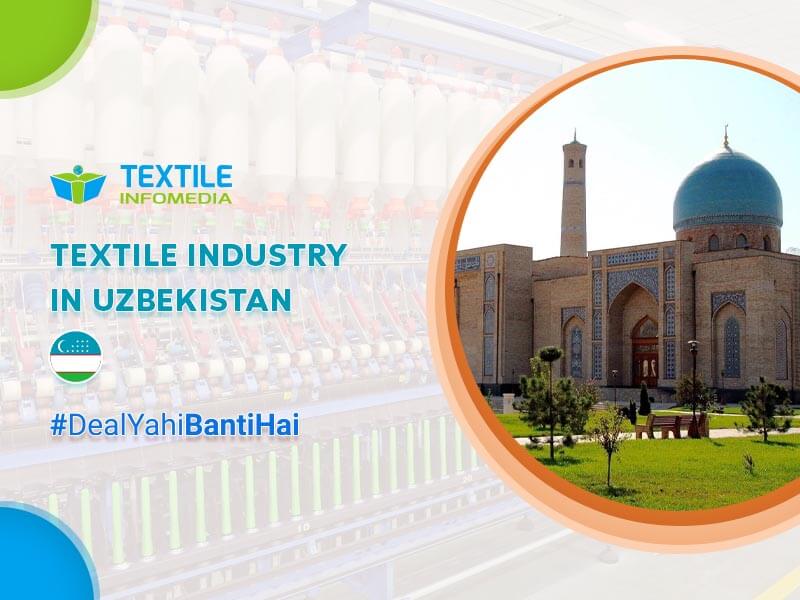 Exoeast Trade LLP is a globally renowned company as a yarn manufacturer, supplier and exporters in Uzbekistan. Exoeast T . . .

we Alliance Textile are the prominent name and engaged in trading, producing,making, exporting and supplying wide range . . .

Agrolife CAN would like to introduce ourselves as specialist manufacturers, traders and exporters of textile cotton,wool . . .

If you are looking for best yarn manufacturers then contact JV Alyorteks in Uzbekistan, We are the manufacturer, sourcin . . .

JV Toshkayatekstil is a globally renowned company as a yarn manufacturer, supplier and exporters in Uzbekistan. JV Toshk . . .

We , Daewoo Textile Bukhara are specialized in textile raw material like Yarn manufacturing, supplying and exporting in . . .

Eldaz-servise provides extraordinary services in the domain of sourcing of textile yarns for global buyers as well as pr . . .

OOO Mirzachul Tolasi is an established name leading in textile industry as a renowned manufacturer, supplier and exporte . . .

With a clearly defined customer centric approach, WOS Muruvvat-Tex have achieved a reputation of being one of the domina . . .

Jayhun Yulduzi is a pioneer in developing and manufacturing a large number of Yarn products like wool yarn , viscose yar . . .

CLC Spentex T.T. LLC is an established name leading in textile industry as a renowned manufacturer, supplier and exporte . . .

Uz Inter Impeks provides extraordinary services in the domain of sourcing of textile yarns for global buyers as well as . . .

Expert teams of Kabool Uzbek Co.Ltd, Jv skilled personnel monitors and supervise every step of the production process to . . .

STS Ltd, would like to introduce ourselves as specialist manufacturers, traders and exporters of textile cotton,wool,spu . . .

Peshkutex would like to introduce ourselves as specialist manufacturers, traders and exporters of textile cotton,wool,sp . . .

Jasur & Company is a globally renowned company as a yarn manufacturer, supplier and exporters in Uzbekistan. Jasur & Com . . .

Alqur Co. is moving forward to our aim of becoming the premier supplier and marketer of fabrics , yarn to the Textile in . . .

Knitex Uzbekistan is a top graded organization dealing in the manufacture and supply of high quality polyester fabric. B . . .

we Balikchi Tex are the prominent name and engaged in trading, producing,making, exporting and supplying wide range of Y . . .

Yarnex Trade is the biggest producer and is one of the leading manufactuer and exporter of Best quality knitting yarns a . . .

Our company Agrochem Service has prided itself on producing and trading authentic stylish design apparel in Uzbekistan . . .

We Farovon Zamona are reckoned as a prime cloth fabrics Manufacturer and Exporter in Uzbekistan. Our wholesale silk fab . . .

Accord Textile is a Wholesale distributers , prodcuer, maker and manufacturers that provide textiles fabrics such as Aw . . .

STS Ltd. is an established name leading in textile industry as a renowned manufacturer, supplier and exporter of FDY yar . . .

Hael is the biggest producer and is one of the leading manufactuer and exporter of Best quality knitting yarns and cotto . . .

Toshtexoffer best range and new designs Apparels and garment products in Uzbekistan. Avail from us a stylish range that . . .

Shark Model has been an innovator in Apparel and Garment manufacturing field in Uzbekistan and conducted its business wi . . .

We are a garment wear manufacturer and exporter located at Uzbekistan and C & C Textiles Co. Ltd. offer vast range of . . .

Our aim is to produce,manufacturing and supply cloth garments locally area and worldwide in textile garment market.Alte . . .

Yakkabagteks is involved in manufacturing of fabrics , yarn In Uzbekistan. Company diversified and grew with experiences . . .

CottonRoad JV is working as a manufacturer, Supplier & exporter Company for fabrics , yarn in Uzbekistan. Backed up by t . . .

Apiteks owe our success to our mentors. They holds long years of experience in the field and is well versed with the pro . . .

Uzbek Craft Export Company have embarked their presence as an eminent Manufacturer, supplier and Exporter of an enthrall . . .

Daewoo Textile Company has huge experienced designers who are expert in customizing the fabrics , yarn. According to th . . .

JV "Samosherteks" is a foremost fabrics , yarn manufacturer and exporter specializing in men and women clothing based in . . .

With locations in Uzbekistan, Daewoo Textile Fergana LLC has been home to the world`s most supplier and exporter of fabr . . .

We are Presenting a latest collection of unique designed fabrics , yarn , Daewoo Textile Ferghana is a Manufacturer, Sup . . .

We are presenting ourselves as a prominent manufacturer and supplier of fibre and textile natural synthetic fibres mater . . .

Leveraging on the expertise of our skilled workforce and vast experience in the field of manufacturing Fibre and Textile . . .

Orshah Home Textile specializes in the distribution and supply of popular brand wholesale cloth apparel, such as shirts, . . .

Turan Garments , one of the leading textile industry in Uzbekistan. We offer wholesale apparel and garments business . . .

With the history of over 12 years in the Apparel cloth , fabrics and Yarn trading business, we at Kalorama Tex are pi . . .

Texkomplus, Llc is a one stop provider of world class solutions in manufacturing and exporting of Apparels and garment f . . .

Ipek Textile , has gained regard among the prominent wholesalers, traders and suppliers of best quality apparel and garm . . .

Uzalgopor manufactures some of the apparel and garments , yarn products and owns one of the most comprehensive and resou . . .

JV has strong manpower to supply best quality apparel and garments , yarn In Uzbekistan. We use superior materials and t . . .

Daeshin Megatex is one of the world`s leading proponents of Fabrics Business and Manufacturing cloth apparel for the . . .

With locations in Uzbekistan, Gurlan, Jsc has been home to the world`s most supplier and exporter of apparel and garment . . .

Our company is among the most realiable textile company that deal in the supplying and trading ofapparel and garments , . . .

Kasansay-Tekmen Wool Textile Industry is one of the Uzbekistan`s leading proponents of Fabrics Business and modern Fas . . .

Inwesttex is involved in manufacturing of fabrics , yarn In Uzbekistan. Company diversified and grew with experiences in . . .

SL Union LLC is well conversant with the changing fashion of the Textile Industry in Uzbekistan, on the behalf of curren . . .

With locations in Uzbekistan, JV Cotton Road has been home to the world`s most supplier and exporter of fabrics , yarn s . . .

Asnam Textile JV has been an innovator in fabrics , yarn field in Uzbekistan and conducted its business with the purpose . . .

Excelent Wool is well conversant with the changing fashion of the Textile Industry in Uzbekistan, on the behalf of curre . . .

We ZARIF Sewing Machine Company Limited are specialized in manufacture,exporter,wholesaler and supplier of Textile equip . . .