Morocco's textiles industry is critical to the country's industrial development. It employs 185,000 people through its 1200 businesses. Textile exports accounted for 15% of Moroccan industrial GDP in 2018, with a worth of 38 billion Moroccan dirhams (3.9 billion US dollars). The same year, exports climbed to 1.13 billion euros, and the country accounts for 0.8 percent of global textile commerce. Spain accounted for 61 percent of total clothing exports in 2018, while France accounted for 20 percent. The United Kingdom, Germany, and Italy were among the other markets. Morocco, a country in northwest Africa, is unique in that it has traditionally solely exported raw materials such as yarn, cotton, and leather. This one-of-a-kind method of marketing textiles has stifled the industry's expansion.

Morocco textile business sector is known for its famous rugs, however they are generally handcrafted by tribal or nomadic peoples rather than being mass-produced. The textile sector of Morocco employs about 200,000 people, making it a significant employer in the country, however the products sold are restricted. Morocco has devised a strategy to boost its economy during the next ten years. They will begin producing finished things rather than just raw materials, providing them a wider range of products to export. Because their commerce with the United States has expanded as a result of China's recent move, Morocco's Minister of Trade has begun to seek investments to help the industry grow to a competitive scale. Check details of all prominent apparel manufacturers, garment wholesalers, Clothing products exporters in Morocco.

Morocco's government has aided the Morocco textile sectorÆs competitiveness, with an Industrial Acceleration Plan 2014-2020 set to expire this year. The textile and garment sector/ will be the focus of a bigger economic growth strategy named 'Maroc 2025,' which will begin in 2021 and will target market growth, production, quality, employment, and export sales. Morocco's only textile product, aside from raw materials, was yards of lovely colourful fabrics. They are recognised for their vibrant colours and patterned fabrics, which are used to manufacture garments and other things in other nations. 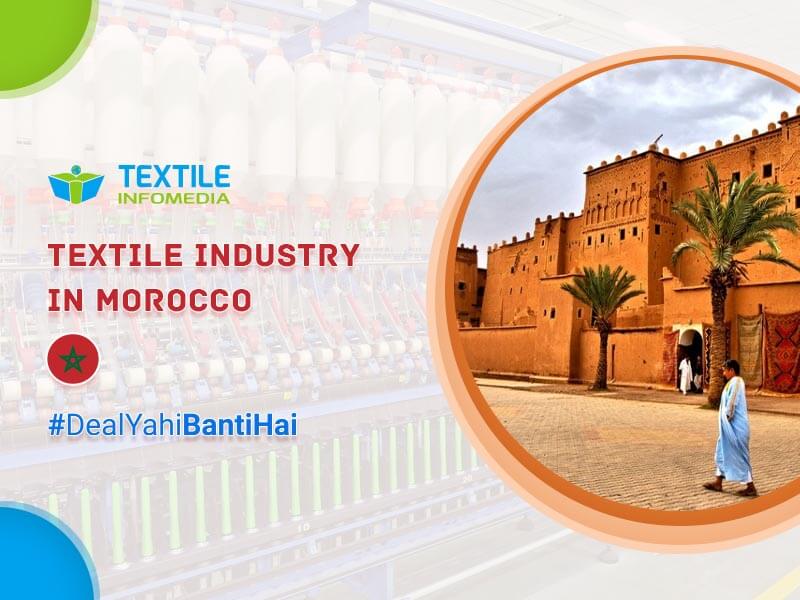 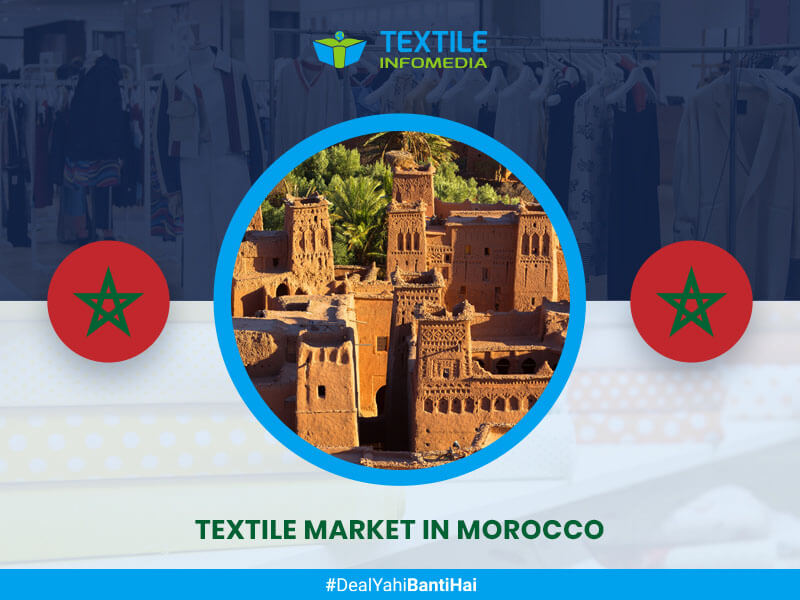 Do buy it really beat quality and good product . . .

The man is a fraud. He has nothing to offer except stories and excuses. Do not engage in any business with him. His addr . . .

Super several types of sarees i like all sarees . . .

Phildar supplies and produces the largest range of cloth in Morocco , as well as womens clothing , mens cloth, fashion . . .

It is the reason why the demand of apparel and garments is increasing day by day. We, Artopiel , are proud to introduce . . .

Marrakech Herbes can offer our products such as apparel and garments in customized forms as per detailed specifications . . .

We, at La Maroquinerie Talmar are gladed to introduce ourselves as pioneers in providing best designed quality apparel . . .

Aer. Geissmann & Fils`s comprehensive range of products like apparel and garments. We are manufacturer, wholesaler and r . . .

Benare Negoce`s comprehensive variety of textile products such as apparel and garments. We are best traders, manufactu . . .

Our aim is to produce,manufacturing and supply cloth garments locally area and worldwide in textile garment market.Svel . . .

Svelto is a organization that specializes in the sale of wholesale apparela and garment serving thousands of customers i . . .

Having been in business since many years and being one of the Leading name in cloth and apparel manufacturing establishm . . .

Amernis Confection can offer our products such as apparel and garments in customized forms as per detailed specification . . .

Gehatex has been established as a business deal in wide range of apparel and garments products . . .

Since last 15 year, Maccess has served garment product thousands of retailers and wholesaler throughout the Morocco. . . .

Ariel Confection Sarl has been established as a business deal in wide range of apparel and garments products . . .

Bogart S.A supplies and produces the largest range of cloth in Morocco , as well as womens clothing , mens cloth, fashi . . .

Confection Salsabile is dynamic producer, manufacturer and exporter of garment products situated in the Morocco. We w . . .

Engaged in supplying and exporting of apparel and garments in Morocco . . .

Entreprise ├Ć Capital Forfaitaire is a Prominent firm, leading in the textile industry since last many years in Morocco. . . .

Morocco based, Manufacturer and supplier of unique Ethnic Wear, Childrenwear and Casual wear for Men, Women and kids. Ch . . .

Teruti Sarl core specialization is our top of the line products and innovation that spans from high quality Fabric mater . . .

Dahbi Idrissi is emerging name for manufacturing Fabrics in Morocco. Our Trendy Cotton Fabrics is available in numerous . . .

we have gained wide appreciation in the textile industry as a prominent Fabric Manufacturers. Texnord entire gamut compr . . .

Easy Wear has been established as a supplying and producing apparel and garments business in Morocco . . .

The apparels and garments are manufactured using quality fabrics that are sourced from some of the certified vendors acr . . .

Having been in business since many years and being one of the Leading name in cloth and apparel manufacturing establishm . . .

Choltex supplies and produces the largest range of cloth in Morocco , as well as womens clothing , mens cloth, fashion . . .

Craftart is a vertically integrated textile company in Morocco, engaged in the manufacture and export of a wide range of . . .

Sahara Confection constantly try to go further and make better by renovating ourselves in the field of cotton and decora . . .

we have gained wide appreciation in the textile industry as a prominent Fabric Manufacturers. Somada Sarl. entire gamut . . .

Jihanine Sarl has vast knowledge and experience in the field of Fabric manufacturing and trading in Morocco. We have se . . .

ETS LAMRANI FRERES core specialization is our top of the line products and innovation that spans from high quality Fabri . . .

Sime Watch Limited is a professional manufacturer and exporter of plus size tops cloth Ethnic Wear in Morocco. We Offer . . .

Belcof`s comprehensive range of products like apparel and garments. We are manufacturer, wholesaler and retailer of a hu . . .

Scim can offer various products and materials such as apparel and garments in customized forms as per our customers at r . . .

AgentX`s aim is to deliver best quality products on time with best offers and reasonable rates. As one of the successful . . .

BK Business is a Manufacturer Textile Cloth company since last many years standing in the chosen business of Fashionabke . . .

Espace Diffusion works with a broad spectrum of trendy plus size clothing manufacturing companies of Morocco. We are equ . . .

Sekkat Sarl is one of the foremost Manufacturers ,prdocuer,maker and Exporters of textile fabrics in Morocco. Constant c . . .

Sofilatex is a well established, successful, home based Morocco firm. The Sofilatex manufactures , cloth designer and . . .

Being chief in the fabric textile market, Amsnegoce is offering a vast range of cloth Fabric material in Morocco. These . . .

Tissage Ecru , Morocco offers an always increasing line of high quality fabrics materials that will suit your every ne . . .

Filaine is a pioneer in developing and manufacturing a large number of Yarn products like wool yarn , viscose yarn and d . . .

Jaditex is an established name leading in textile industry as a renowned manufacturer, supplier and exporter of FDY yarn . . .

Mekmotex is an established name leading in textile industry as a renowned manufacturer, supplier and exporter of FDY yar . . .

Mateas Sarl is able to distribute our valued clients with a comprehensive range of garment apparel and cloth. We are an . . .

Rexcelmaroc has been based in the Morocco, specialising in the business of manufacturing and exporting of apparel and ga . . .

Fashion can be defined as the combination of style, elegance and look. our Novamod company represents cutting edge fashi . . .

Top Quality s.a.r.l , has gained regard among the prominent wholesalers, traders and suppliers of best quality in Moroc . . .

ICI Emballages is involved in manufacturing of fabrics products and textile materials in Morocco. Our entire assortment . . .

Coin De Soie has been an innovator in textile fabrics field and conducted its business with the purpose of growing into . . .

Benbertex is one of the fastest growing company for garment wear collection, functioning successfully in Morocco. Our in . . .

Being leading name in the fabric industry, MOFITEXTILE is engaged in offering a wide range of Fabric and textile product . . .

We are little different from other Ethnic wear manufacturers, supplier , exporter and Oasis customers know it. They reco . . .

Eazem Business-Agency is a one of the leading organic fabric manufacturers and trader in Morocco having vast experience . . .

we Petit Poussin are the prominent name and engaged in trading, producing,making, exporting and supplying wide range of . . .

We , Richbond are specialized in textile raw material like Yarn manufacturing, supplying and exporting in Morocco. We wi . . .